This post describes, step by step, how to setup a workflow for importing React components from NPM, using Webpack, and incorporate them in your Reagent views.

UPDATE (June 17th, 2017): A year later, this post and method are very much still relevant. I’ve made a small update to take advantage of the :foreign-libs option, as suggested in the comments (Thanks Andreas and Alex!), which reduces the plumbing necessary.

Any Javascript developer using a modern build tool can easily test and incorporate React components from 3rd party developers in their app. It’s usually just a matter of declaring dependencies, building and importing.

Moving to Clojurescript and Reagent has been amazing in many ways but I just couldn’t wrap my head around a comparable import flow.

The workflow I will describe employs NPM as a dependency manager and Webpack as a build tool. The build artifact is added as an external Javascript dependency to an otherwise (pretty) standard Leinnnigen build process.

This solution does not use Cljsjs in anyway.

Cljsjs is a great community effort to package common Javascript libraries in a Clojurescript friendly way. However, it has some shortcomings.

In this example we’ll start with a simple frontend-only Reagant app and setup a workflow that will allow us to add a react-player component to it. Let’s call this project Zefstyle. You can also skip this altogether and just jump to the finished result here.

Starting with a template:

While that’s running, open public/index.html in your favorite browser. You should see a page that says “Welcome to Reagent”

Since we’re running figwheel, we can change that live. In public/index.html change the header to “Zef Style” - You should see it updating within seconds. You can then close fihghweel for now.

All of our dependency tree should now be in the node_modules directory.

An alternative approach to this step would be to use the lein-npm plugin. I’m pretty comfortable with npm so I decided to do it myself.

Our webpack setup will be pretty minimal - no fancy loaders. It consists of a definition file webpack.config.js and an entry script that bootstraps our imported libraries to the window object.

We basically defined our entry point script as src/js/main.js and our output artifact as public/js/bundle.js.

Now we can either run

For a onetime build, or:

For a continuous build that watches for changes in our code. Given that the Javascript code should remain pretty static the watch might be redundant.

Like I mentioned before, we’re counting on webpack to bring React into the picture. That means that we need to get rid of the cljsjs.react & cljsjs.react.dom packages that reagant depends on.

In project.clj let’s change our dependencies to be:

And add an external dependency to our webpack generated bundle.js through :foreign-libs. We need to add the following to all build profiles:

Notice how our foreign lib satisfies all react dependencies and also add a convenience namespace, webpack.bundle, for importing the external bundle.

At this point it’s a good idea to cleanup and re-run figwheel.

Now that we have everything in place we can add the react-player to our main Reagant view.

in src/zefstyle/core.cljs let’s add the webpack.bundle dependency to our namespace:

and change our home-page function to be: 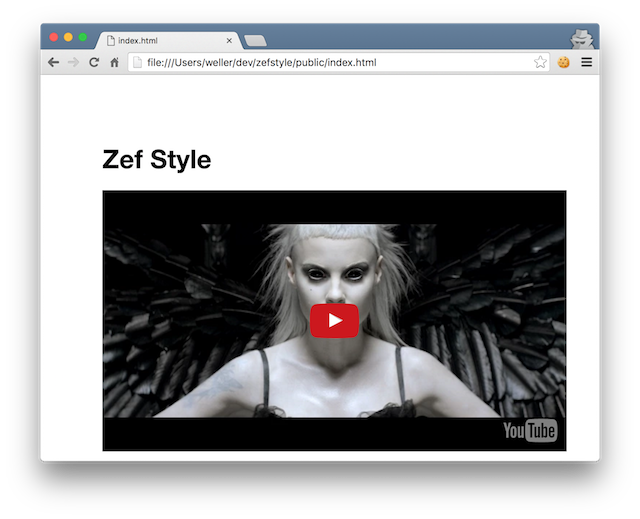 Voila! We brought the pure JS react-player component into our Reagent view.

To bring in new components we just need to declare them in package.json, require() them in main.js and rebuild.

Let me know if this was helpful, requires some fixups or if it’s complete rubbish.