Note: a previous version of this post had some licensing terminology issues. This post discusses Free software.

Last Sunday the Media Lab hosted a Public Dialogue on DRM and the future of the Web. Amongst the speakers was Richard Stallman (aka RMS), founder of the Free Software Foundation. Although there was a lot of interest in the event from outside of the media lab, it couldn’t be streamed with MIT’s setup even though it was being filmed. MIT’s video streaming service is proprietary and Stallman will not use, or even take part in using, software that is not completely free. 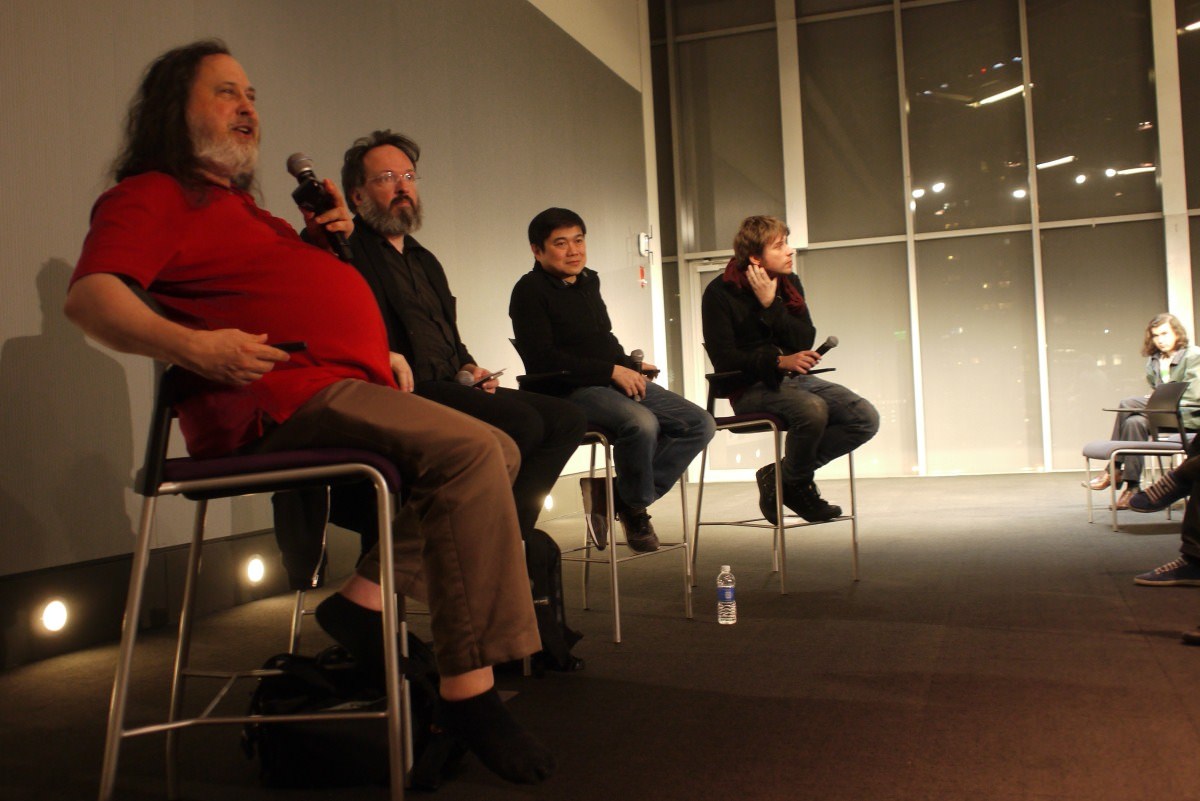 Earlier that day, during a lunch hosted by Joi Ito, Tal Achituv and myself toyed with the idea of deploying a WebRTC based solution that is free and will be approved by RMS. After doing some research, it seemed that there are indeed free WebRTC options for broadcasting. Now, a couple of hours before the panel, we decided to go for it.

This resulted in two hours of hectic coding, setup and equipment search. 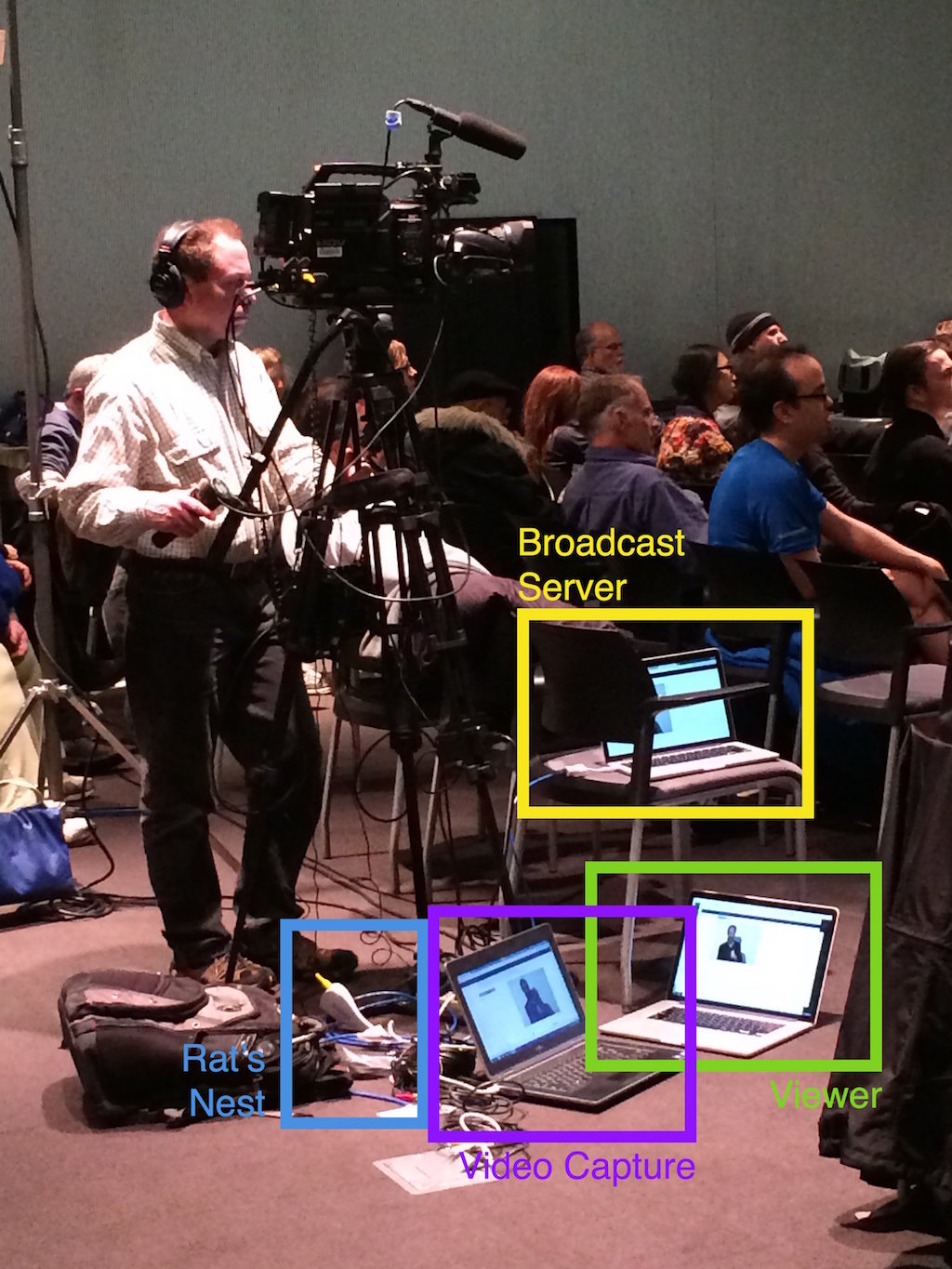 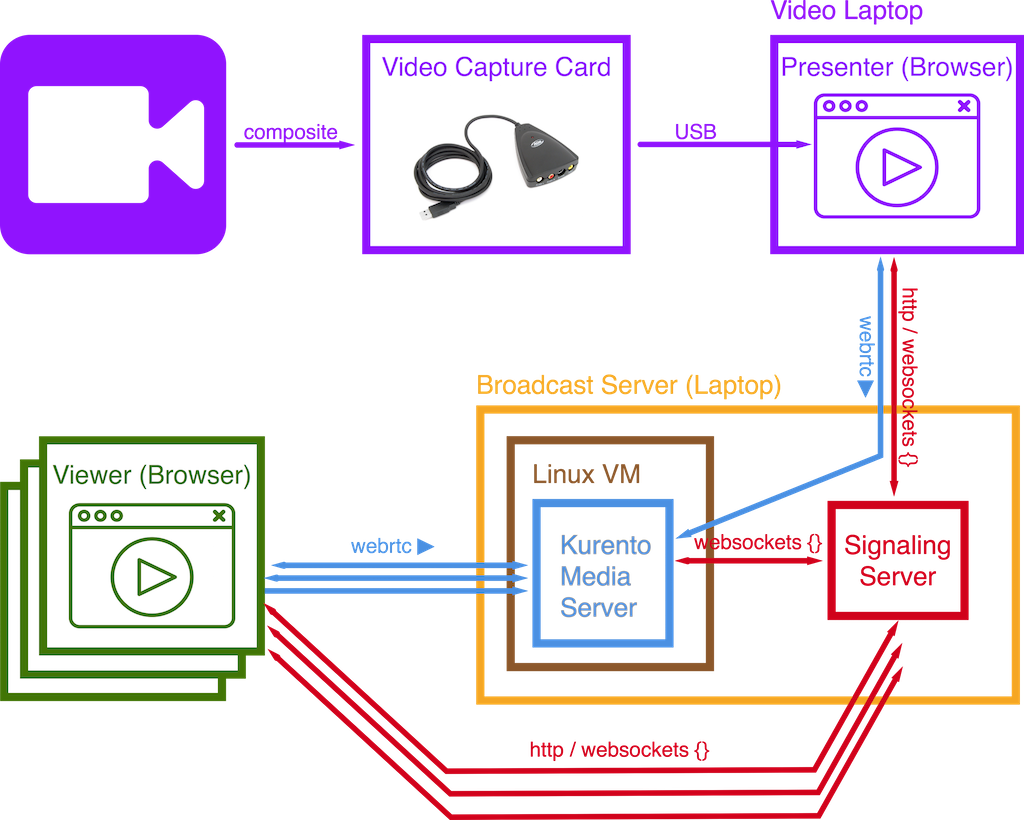 Kurento (LGPL-2.1) is a free media server. It implements the WebRTC spec and uses GStreamer under the hood for any multimedia processing. In this case we used Kurento as a broadcasting server: it received one WebRTC AV stream from a presenter (the video capturing laptop) and retransmitted it via multiple WebRTC streams to viewers.

We ran Kurento on a Linux VM on my laptop. The intention was to test on a VM and then deploy to some cloud service. However, due to lack of time, the debug setup became the production one.

The signaling server is responsible for serving static assets and connecting the clients with the Media server via WebSockets. Our Node.js server was based on Kurento’s one-to-many video call tutorial and ran on my laptop. When I say based I mean completely copied. The only change we made was to separate the presenter page from the viewing page and completely remove everything besides the video container on the viewer page. here’s the code. 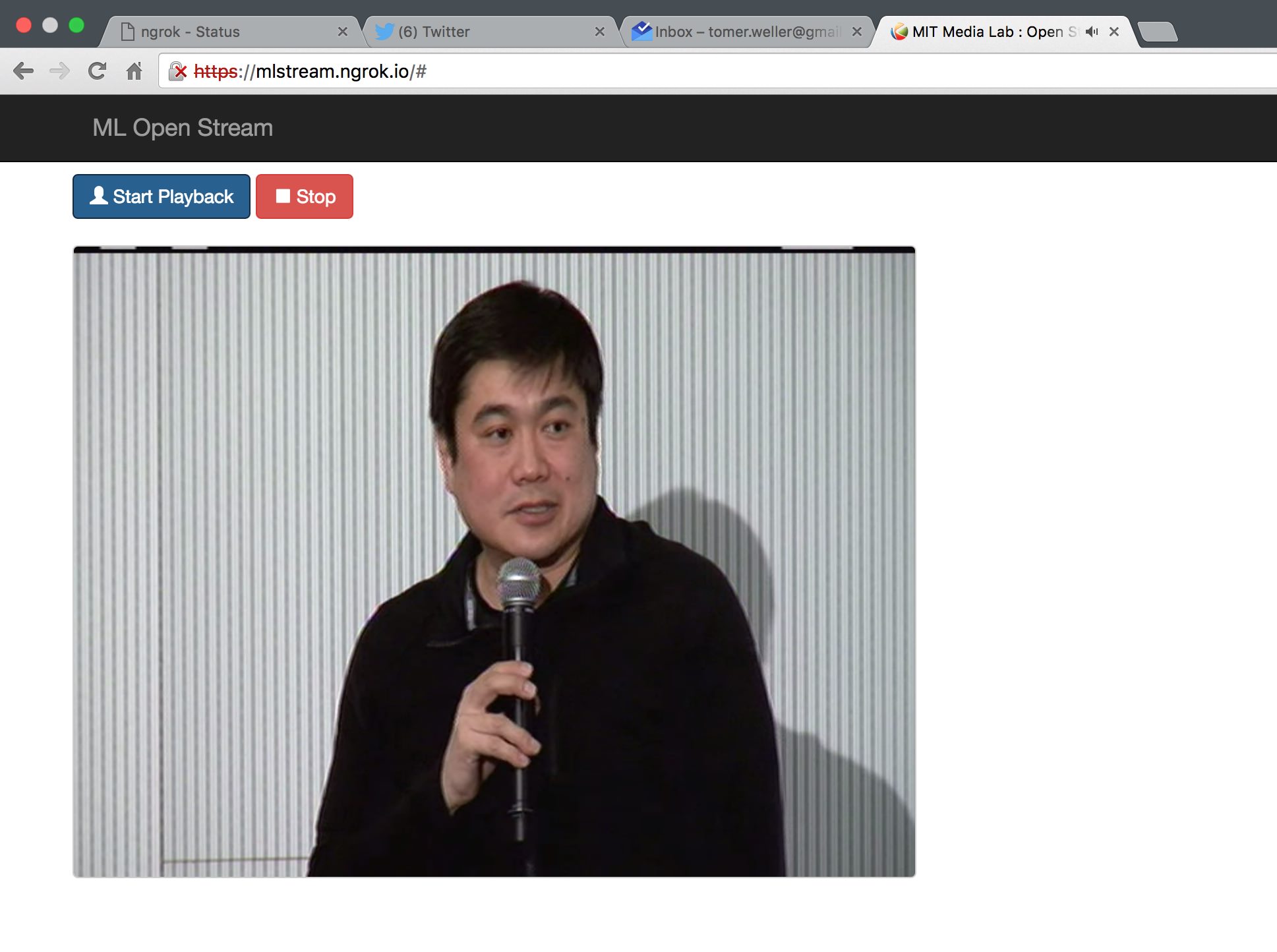 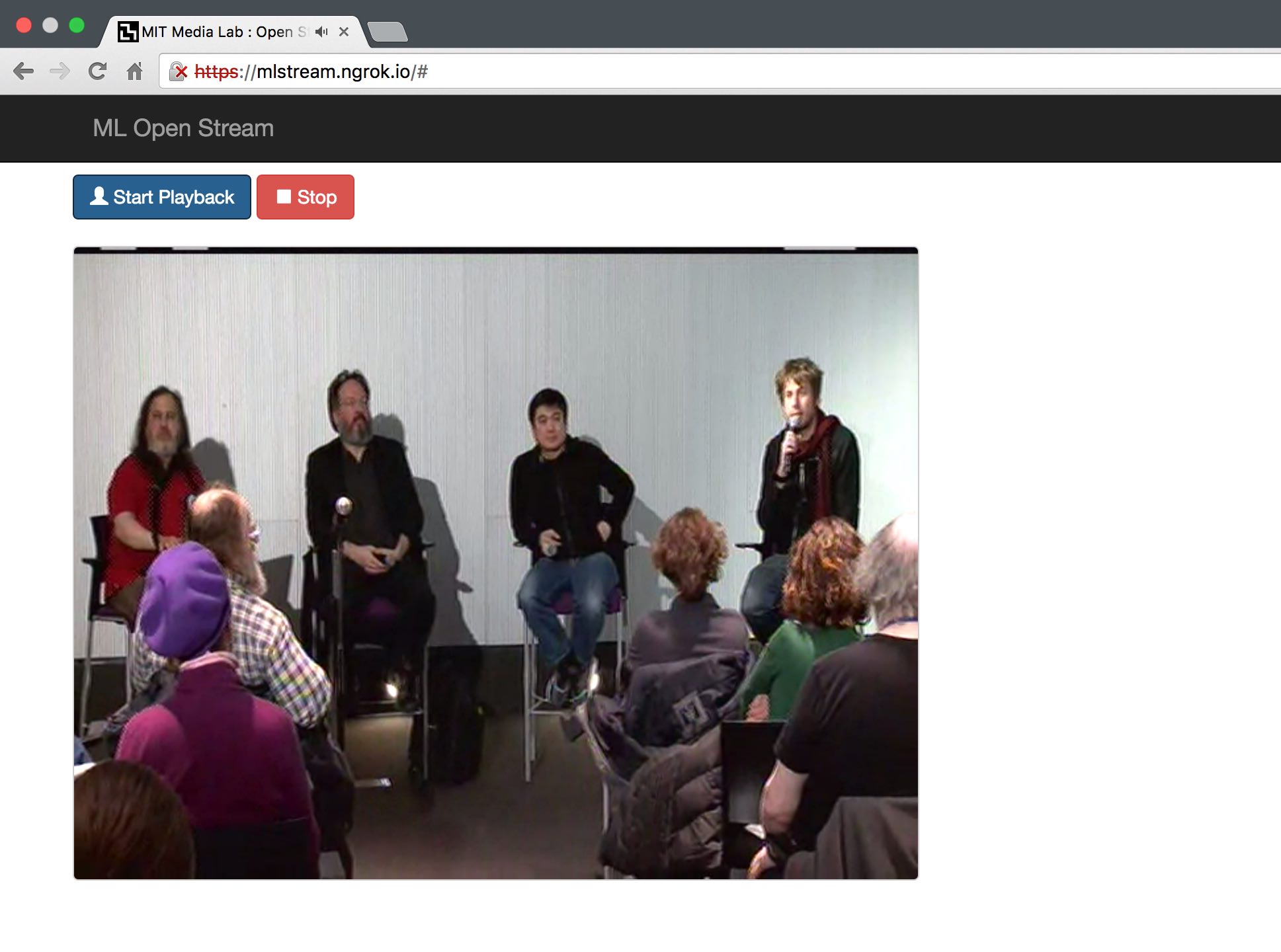 Screenshots of the live viewing page. Notice the change in the favicon. 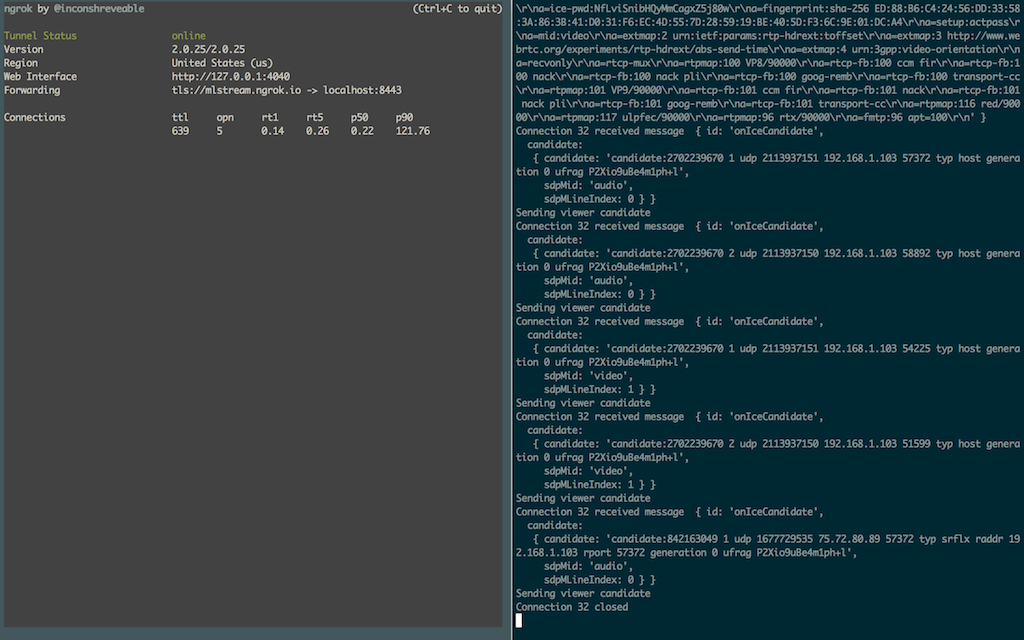 Tal managed to find a cheap video capture card in the lab (something like this) and a laptop that would actually work with it (ours didn’t). We used Firefox to connect to our presenter endpoint which handled the WebRTC handshake with the Media server.

We had a peak of 37 concurrent streams and averaged around 12. Due to time constraints and because the panel was actually quite interesting we didn’t have any continuous monitoring or collected information about load but it sure felt like we could handle a lot more. The machine was responsive (even the VM) throughout the session and I’m still amazed that a tiny VM with no optimizations handled it. KUDOS to Kurento.

Thank you Tal Achituv for reminding me all of the above.